Robert and his team are often asked what makes eutaptics/FasterEFT different. After all, tapping is a popular technique. There are many different methods and systems to tapping, and many different people teaching it.

eutatapics/FasterEFT was created out of years of studying systems and modalities like EFT, NLP, neuroplasticity, and mindfulness. The strategies, methodologies and techniques involved in eutatapics/FasterEFT are backed by science, experience, and results. Today we’re going to look at the four main elements of eutaptics/FasterEFT.

EFT stands for Emotional Freedom Tehnique, and is also often called simply tapping. EFT focuses on the meridian points of the body to restore balance to your body’s energy. You use your fingers to apply pressure to those meridian points, which are thought of as areas of the body energy flows through. (This idea comes from Chinese medicine.)

EFT is a simplified version of TFT (Thought Field Therapy — the original tapping therapy developed by Dr. Roger Callahan). After learning TFT, Gary Craig took what he learned and simplified it, calling it Emotion Freedom Technique. He began marketing it, making it available to the world. Gary posits that a disruption in energy is the cause of all negative emotions and pain. His reasoning is that stimulating the meridian points through EFT tapping can reduce stress or negative emotions, restoring balance to your disrupted energy.

Energy means lots of things to lots of different people. Energy work is something that can seem a little out there for people, and that’s what is often associated with EFT. Being from Oklahoma, Robert has taken the ideas behind EFT and explained it in a way that is logical. It makes sense to most people, unlike the ideas behind most energy work. Unlike traditional EFT, with FasterEFT we know it works because we know how tapping affects the autonomic system of the mind (something we’ll talk about later).

There is strong scientific evidence that tapping is effective. A study conducted in 2013 on veterans with PTSD found that patients receiving tapping sessions significantly reduced their psychological stress, and more than half of the tapping test group no longer fit the criteria for PTSD. Another study in 2016 compared the effectiveness of tapping over traditional care for anxiety. It found that those with tapping treatment had a significant decrease in anxiety scores compared to those that did not.

eutatapics/FasterEFT believes that there’s nothing wrong with you. Instead, your problems are built from the memories of your past, consciously known or unknown. We go back to see what you’re doing inside yourself to successfully create your problems.

eutatapics/FasterEFT is client based. Each person who has a problem has their own unique way to create it. Instead of doing call outs and trying to do the same thing with everyone, we change the style of technique, the speed, the intensity, based on each person depending on how they represent their problems. We look at auditory, visual, and kinesthetic memories. We use the Art of Change® to pull the strategy out and how they created their problems, and then we make the adjustments.

This makes eutatapics/FasterEFT a flexible system that can be adjusted for each client. Our problems are created by the memories we have, and they can be changed by rewriting those memories…which leads us to the next element of FasterEFT: NLP.

NLP, or Neuro-Linguistic Programming, is a behavioral technology that allows you to change, adopt or eliminate behaviors, as you desire, and gives you the ability to choose your mental, emotional, and physical states of well-being. This is done through the connection of neural processes (the neuro of NLP), language (the linguistic of NLP) and behavioral patterns learned through experience (the programming of NLP). NLP reveals the kind of communication that matters most: the communication within you.

NLP is beginning to be incorporated in some forms of psychotherapy with great success according to one study. It’s also been used to treat phobias and fears in another study!

NLP isn’t user friendly for yourself, though. That’s why eutatapics/FasterEFT uses the framework of NLP to go inside each individual’s mind to help them rewrite the unpleasant memories and experiences. It’s a tool that can be used to generate internal changes.  NLP gives you the building blocks to how you create problems.

NLP also posits that the human mind is something like a computer, and as such, can be reprogramed by changing our verbal and body language. In eutatapics/FasterEFT, we say that NLP is changing how you represent your world neurologically — visually, physically, and auditorially — and rewriting internal strategies. This is neuroplasticity, another element that is the foundation of eutatapics/FasterEFT.

Neuroplasticity is the brain’s ability to reorganize itself by forming new neural connections. It’s happening continuously in your brain, even as you read this! Your neural connections (neural pathways) are altered as an effect of environment, behavioral, and neural changes.

So what are neural connections? They are connections between neurons in your brain, connecting one part of the nervous system to another. These pathways are the basis for every thought we think, every action we take, every feeling we feel, every memory we have. The more we think, do, and feel something, the deeper the pathway becomes. Think of it like a dog running along a fence line. Over time, the ground is worn deeper and deeper. Conversely, by not thinking, doing, or feeling something, the pathway begins to disappear.

Neuroplasticity has been widely researched in the last few decades with fascinating results. One study found that as few as ten one hour sessions of cognitive training over a period of only 5-6 weeks has the potential to reverse the same amount of age-related decline. Another study revealed that participants (in this case, London taxi drivers) showed physical changes in the hippocampus as a result of years of driving and studying maps of London thanks to their jobs. Other studies of people learning to juggle and of medical students have found similar results.

In eutataptics/FasterEFT, the whole goal of the session is to rewrite memory. When we understand how neuroplasticity works, we’re given a formula of how to rewrite the memory. We’re able to understand how it works, thanks in part to Daniela Schiller, PhD and her work at Icahn School of Medicine at Mount Sinai.

There is a natural unconscious way that memories are always updated once you visit the memory. We use this same principle, and by interjecting a defrac (tapping, laughter, kinesthetic action), you can actually update memories to change the memory — quickly and effectively.

With the NLP understanding, we’re able to step inside the mind’s eye and make the adjustments. We’re able to identify how the memory is being represented and then change each representational system. We’re then able to reconsolidate (or update) the memory.

Memory isn’t designed to be factual. It’s designed for survival. Each time you visit a memory, it’s changed. The emotional intensity before you visit the memory affects it. You can make memories better or worse, depending on the emotional drivers that led you to visit it.

Neuroplasticity is often connected with mindfulness, the final major piece of the foundation for eutatapics/FasterEFT

Perhaps the most broad concept we’ve looked at today, mindfulness has a variety of meanings. One of the best all-purpose definitions we’ve seen is simply this: mindfulness is the basic human ability to be fully present, aware of where we are and what we’re doing, and not overly reactive or overwhelmed by what’s going on around us.

In the past couple of years even more attention has been brought to mindfuness after ABC news anchor Dan Harris released the book 10% Happier, crediting mindfulness and meditation with helping him after an on-air panic attack.

eutatapics/FasterEFT uses directed mindfulness. Our response to the world is based on internal references. Directed mindfulness is going inside yourself and noticing how you’re representing things internally, then making internal adjustments to where you’re responding to the world in a more peaceful way. You’re becoming responsible for how you respond to the world, and your reactions will be positive and proactive. In other words, you’re becoming emotionally intelligent.

eutatapics/FasterEFT is essentially faster mindfulness. You get direct and immediate change without hours of meditating. (Not that there’s anything wrong with meditating! It’s a great skill to have.)

eutaptics/FasterEFT was developed out of these four elements to be the best modality to transform yourself. While it’s based on some complex ideas, the recipe for using eutatapics/FasterEFT is simple:

Now, change your focus. Focus only on your fingertips and where you are tapping. Using two fingers, tap the following points while focusing on the feelings of your fingers on your skin:

While you are tapping, say “Let it go” or “It’s safe to let it go”. It doesn’t matter which side you tap. You can do either or both!

Grab your wrist, take a deep breath, blow it out, and say “Peace”.

Think back to a happy memory and enjoy it.

Go back to your problem and notice things are already starting to change. Notice what hasn’t changed yet. Focus on it, and move to step 5.

Repeat steps 2-5 until the feeling or memory has changed to a positive feeling.

It’s truly that simple! But if you need help remembering, save this photo to your phone or computer so you can refer back to it. 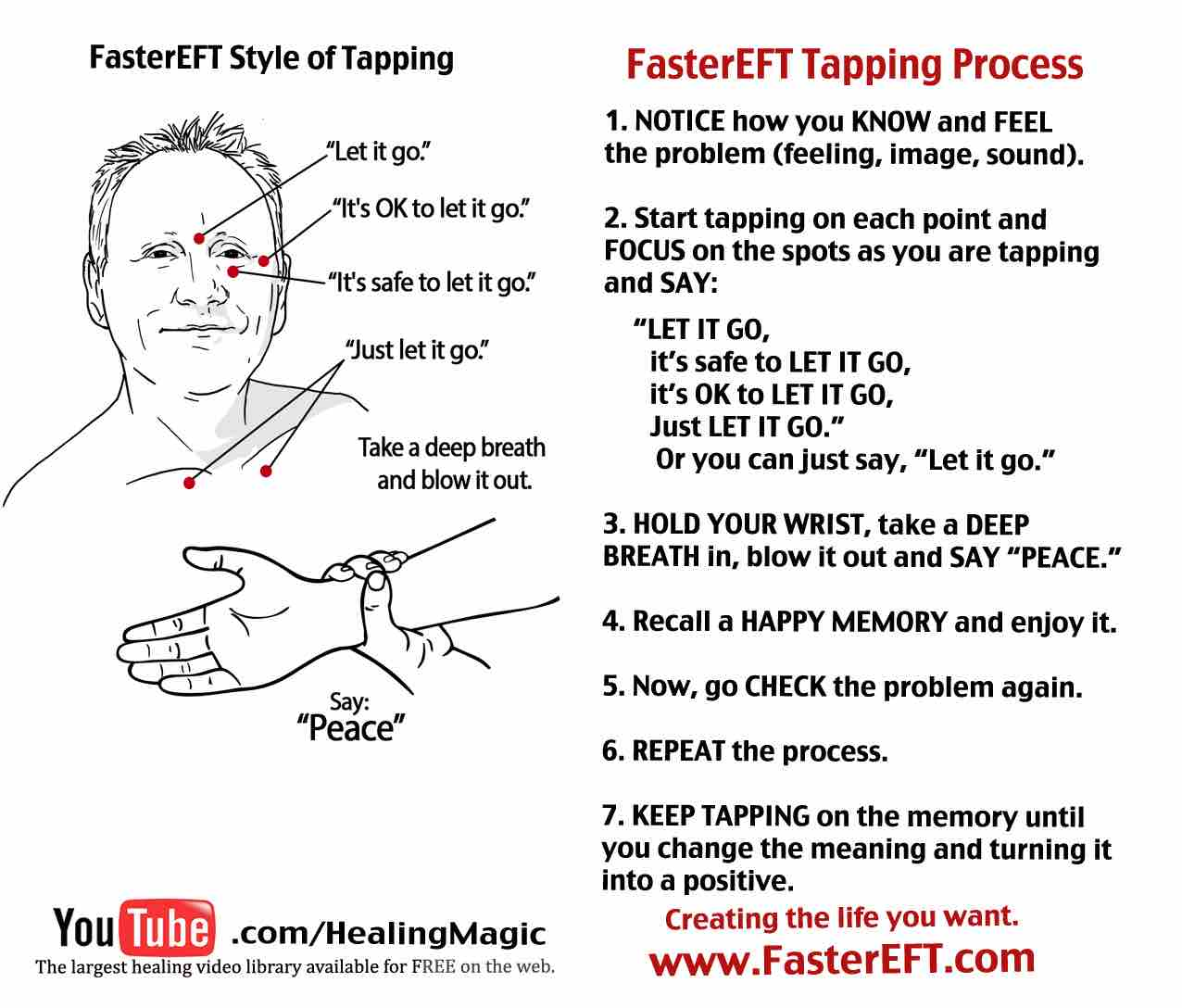 If you’d like to learn more about eutaptics/FasterEFT, join the free 5 Day Introduction course.